Traveling around Kyrgyzstan is so interesting and one of the reasons is the local traditional cuisine that was based on the fusion of a previously nomadic and now sedentary culture. During a tour with the car rent Kyrgyzstan service, visiting different regions of the country, you can taste the most delicious dishes of Kyrgyz cuisine, the taste of which travelers will remember forever. Studying the origins of Kyrgyz cuisine, one can understand that this is a combination of dishes from the cuisine of such peoples as Turks, Persians, Arabs, Indians, Chinese, Russians and Europeans. Therefore, travelers will be able to take tours with cars rent service without doubt, because here you can taste almost all the cuisines of the world. In this small article, we decided to collect information about the most basic and important dishes of Kyrgyz cuisine, and here they are: 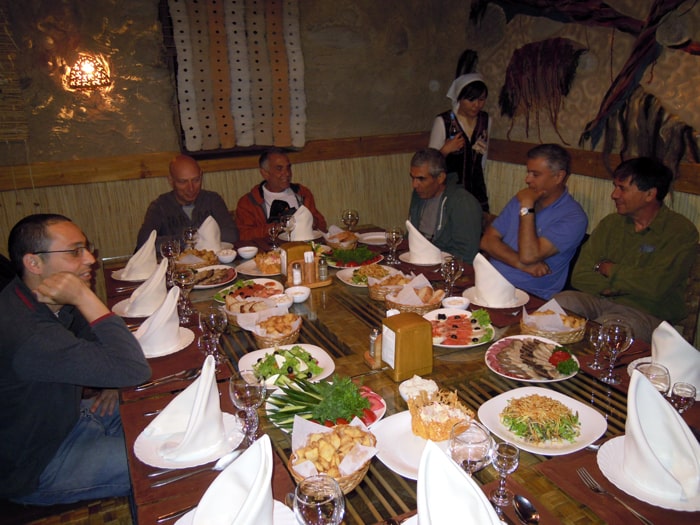 Bread
An important thing that every traveler should know during the tour with car for rent Kyrgyzstan service is that no meal is complete without bread. Since ancient times, nomads consider bread to be something sacred and respectful, in other words, it is customary for nomads not to cut bread, but to tear it with hands, not to put it upside down, but to put it as it should be on the front side. In fact, in Kyrgyzstan there is a wide variety of bread products, but among them lepeshka and boorsok are especially distinguished. The lepeshka is baked in a traditional tandoor oven, the bread is round in shape. A boorsok is fried pieces of bread in oil.

Beshbarmak
This is a traditional dish of the nomadic cuisine that is often served to celebrate important events. The existence of this dish called beshbarmak has been known since ancient times and it is accepted to take such a dish with your hands and not with cutlery. Consequently, having taken this meal, the Kyrgyz wash their hands and say the words of blessing. From itself, this traditional dish represents boiled lamb with onions and dough.

Chuchuk
Traveling around Kyrgyzstan with the car rent Kyrgyzstan service, tourists have the opportunity to taste Central Asian sausage and this is chuchuk. Chuchuk is very often served as a snack at events, holidays and toi (celebration). To prepare chuchuk, the Kyrgyz use ingredients such as kazy kabyrga, ulcers, salt, pepper, black pepper, onion, garlic, caraway seeds, and bay leaves. Well, an important point when marinating meat is to use various spices.

Kuurdak
Kuurdak is one of the very popular and favorite dishes of the Turkic cuisine, which you can taste while traveling around Kyrgyzstan with the cars rent service. The dish is made like this: beef or lamb meat is fried with potatoes and onions. In ancient times, nomadic tribes prepared kuurdak on metal. By the way, thanks to the stones, the dish acquires a unique taste.

Shorpo
This is a variety of soup that is popular in Eastern countries. The soup is made from meat with herbs and vegetables. When tasting shorpo on tours with car for rent Kyrgyzstan service, travelers add more red pepper to make the flavor unique, and it is believed that all the ingredients will taste unforgettable.

Plov
This dish of Kyrgyz cuisine is considered a must-have dish because they cook it for weddings, funerals, childbirth, etc. Now such a dish as plov (pilaf) is prepared not only in the countries of Central Asia, but also in some places in other countries.

Samsa
These are perhaps the best meat pies with onions and spices baked in a tandoor or on special stones. Travelers will not regret it during the tour with car rent Kyrgyzstan service if they try samsa. By the way, you can find samsa fillings for every taste today, there can be any meat and vegetable fillings, as well as with chicken.

Manty
This is a traditional dish of Kyrgyz cuisine that was adopted from neighboring peoples back in ancient times. Today, almost every modern Kyrgyz family adores this dish and by the way, according to the rules, they eat it with their hands. Manty is stuffed dough with meat with spices, which is cooked in a special steamer (kaskan). Manti should be served in a large plate and placed in the middle of the table, and from there every participant of the meal will put the desired portion for himself.

Lagman
Lagman is a traditional dish of cuisine of the peoples of Central Asia that is long homemade noodles cooked in lamb meat broth with vegetables. By the way, noodles for lagman can now be bought in grocery stores. Lagman can still be cooked with a lot of water, and then the dish will resemble thick soup. Ingredients such as peppers, eggplant, beans, radishes, onions, carrots, etc. are used to prepare lagman.

Ashlam - Fu
This is exactly what makes the city of Karakol a popular travel destination. Because it is here that, you can taste the most delicious Ashlyam - Fu. Travelers therefore take the cars rent service for a tour to get to this city. In fact, ashlyam - fu is a cold soup made with sour and spicy vegetable broth with noodles and pieces of starch. The dish, which is of Dungan, Chinese and Muslim origin, is ideal for hot summer days.

Shashlyk
This is a dish of Kyrgyz cuisine that is skillfully marinated pieces of selected meat, put on skewers and grilled over coals. Something similar to a kebab. Taking the car for rent Kyrgyzstan service during the tour, travelers can taste the fragrant Shashlyk in any restaurant or cafe in the state. In order to get such a juicy dish, meat is first marinated with various spices and sauces, and is cooked on a skewer with various vegetables.

Dymlyama
An easy-to-cook dish here is called dymlyama that is stewed cabbage, carrots, bell peppers, onions, eggplants, potatoes with meat, etc. An easy dish because all you have to do is put in the ingredients one by one and leave to simmer.

Ganfan
Ganfan is a traditional Kyrgyz dish that locals love very much. Ganfan is almost a lagman, but there are significant differences: firstly, they use less water, secondly, they use more vegetables, and thirdly, instead of noodles, they use rice.

Borsch
Borsch is one of the main symbols of Slavic cuisine. And isn't this a great chance, traveling around Kyrgyzstan with cars rent, to taste Slavic cuisine during the tour? Borsch is a red soup made from beets, which also contains beef and other vegetables.

Cutlets
Travel around Kyrgyzstan with a car rental and visit restaurants to taste a dish originally from French cuisine called côtelette. Europeans originally prepared a dish from the rib meat. Potatoes and onions are added to the cutlets. In general, for a dish, meat can be of different animals, for example, chicken, turkey and beef.

Kurut
Kurut is a fermented milk snack favored by local children and even adults. Kyrgyz kuruts are made in the form of small balls, and they taste salty, creamy, sometimes sweet and sour, even spicy.

Mampar
All travelers during the tour with the car rent Kyrgyzstan service understand that Central Asian cuisine is rich in the presence of various soups. And mampar is one of them, that is, it is a rich soup made from boiled dough (dumplings) with onions, herbs and potatoes.

Pelmeni
The Kyrgyz people were significantly influenced by Slavic people, so that is why the pelmeni start to be favored by the Kyrgyz. This meal is a boiled one that is dough stuffed with meat and boiled in salty water. Then it is served with sour cream and ketchup, mayonnaise.