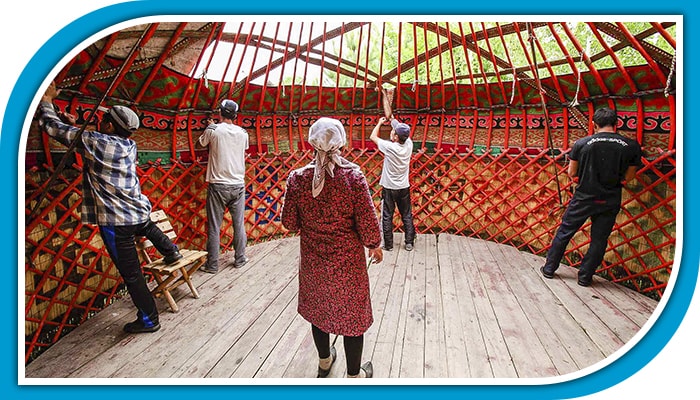 
Day 1: Bishkek - Ala Archa - Bishkek
Bishkek is the capital of Kyrgyzstan, one of the main cities of the countries which takes an active part in the tour system of the country. First the guests arrive at Manas International Airport. Then the driver of our company meets you and takes to the center of the city. The next option is to take a city tour along the Pobeda Square (Victory Square), Duboviy Park (Oak Park), Central Ala-Too Square, Old Square, National Philharmonic. As for more impressions we recommend going to the Ala Archa gorge. In 45km from the capital of Kyrgyzstan you can get in touch with pristine beauty of nature. Here we walk along the territory of the Tien Shan mountain range. The panorama views here is wordless. The night is in the hotel.

Day 2: Bishkek - Burana - Issyk Kul northern shore
The second day of the tour is made along the country right to the Issyk Kul Lake. The lake is considered to be the second largest lake located at the great altitudes, about 1600m above sea level. It is said to be named as the pearl of the country. Then we make a stop at the Burana tower, the minaret of the 11th century surrounded by the stones balbals. The region is famous for being the location of inscriptions of 800 BC. The night is in the hotel.

Day 3: Issyk Kul - Grigorievskoye - Semenovskoye - Karakol
Semenovskoye and Grigorievskoye gorges are perfect sites of Kyrgyzstan in the Issyk Kul region. Mainly Natural Park is seen to be the magnificent site of Kyrgyzstan. Green valleys and pastures show the amazing views for the animals like hares, fox, yaks and others. The next destination of the day is Karakol city. Famous for Dungan mosque and Orthodox Church. The night will be in the guesthouse.

Day 4: Karakol - Skazka - Bokonbaevo
The fourth day will be made along the Jeti Oguz gorge, also known as the Seven Bulls. The gorge is seen as the combination of stones, in form of the bulls standing a row. They are of red color. The tour here will be made along with the legends and myths to be told. Near it there is the Broken Heart Mountain, which can be vaulted for 20 minutes. Kyrgyzstan is the country with high mountains and blue waters, the sky of deep beauty. The lake Issyk Kul is the pearl of the country, also bearing the legends and myths. Then we make a tour to Skazka (Fairy Tale) Canyon, in the form of the red sand creations. Bokonbaevo village is famous for eagle hunters and their eagles able to hunt hares and foxes. The night will be spend in the yurts.

Day 5: Bokonbaevo - Kyzyl Tuu - Bishkek
Today the guests are going to travel to Bishkek, the capital of Kyrgyzstan. The tour is oriented on the visit of the Kyzyl Tuu village. This village is oriented on the show of the felt dwellings creation. The night will be made in the hotel.

Day 6: Bishkek - Almaty
From Kyrgyzstan we make a tour to Kazakhstan. The way takes about 4 hours and the city tour is oriented on the investigation of main highlights of the country. The guests are required to visit the Green Bazaar and buy anything you desire just bargain here! Rare and unique souvenirs can be bought here. Then we recommend going to the Panfilov Park and Zenkov Cathedral. The tour in Kazakhstan is considered to be interesting just with visiting of the Medeo gorge, where the famous skating rink is located and open for the tourists annually. Near it there is an amazing Kok Tobe hill tending to be one of the tallest TV towers. In the end of the day the visitants will be taken to the hotel for the night.

Day 7: Almaty - Issyk - Almaty
From the southern capital of Kazakhstan the guests are taken to the Issyk gorge with visiting of the lake of the same name. In order to get to the gorge the guests of the country need to pass the Trans-Ili Alatau and the Kuldja tract. Being here please make a view of the "Golden Man" monument. The guests are also offered to visit the State Historical and Cultural Museum-Reserve "ISSYK". The route to the monument of Saka period set at the height of 1756m above sea level. The lake was formed 10000 years ago. The water of the lake is of exquisite beauty, of turquoise color. The hotel will be ordered for the night.

Day 8: Almaty - Tashkent
This day we are going to devote to the way from Kazakhstan to Uzbekistan. The guests travel from the airport of Tashkent. The city tour is based on visiting of the Independence Square, local Broadway and Amir Timur Square. All of the places tend to have great historical meaning. The boarders have a chance to witness the famous Tashkent metro created in 1977. Then as the guests travel in Uzbekistan they find the Chorsu Bazaar, Kukaldash Madrasah and Hast Imam complex to be the perfect locations for seeing. The night will be made in the hotel.

Day 9: Tashkent - Bukhara
Trying to see the best the followers of the great emotions travel to Bukhara. This is the cultural place of Uzbekistan seems to be the one tending to be the Citadel Ark, created in the 4th century. Many of the dynasties of Bukhara Empire found the home in this Citadel. Then we recommend seeing the Samanids mausoleum, Chashma Ayub, Poi Kalon complex. These are the locations of the 15th century. The main structures of Kalon minaret, Kalon mosque and Mir Arab Madrasah tend to be of the 16th century. The night will be in the hotel.

Day 10: Bukhara - Gijduvan - Samarkand
Uzbekistan is famous for Samarkand, the city which always impresses the people all over the globe. Gijduvan village is our next point of the tour the guests travel. The village is famous for the Gijduvan ceramics, tending to be the main national heritage the skills of which are going throughout generations. The next complex to be see is Al Bukhary, the main site for the Muslims. The night will be in the hotel.

Day 11: Samarkand
Samarkand is the city which we are going to travel being in Uzbekistan. It is said to be the unique creation on the Zerafshan River. The locals tell it is the second largest city in the country, compared with the Babylon or Rome. Being here the guests are going to visit the Registan square, Shakhi-Zindeh, Mausoleum Guri Emir and Bibi Khanum Mosque. The first place is said to be the heritage of the locals, the second of the list is considered to be the museum with the collection of mausoleums. Then we make a witness of the Bibi Khanum Mosque, and in the end the night is in the hotel.

Day 12: Samarkand - Oybek border - Penjikent
From Uzbekistan the boarders are taken to Tajikistan in order to witness the famous Penjikent city, or the city of five villages of 5-8th centuries. This is the popular city of Tajikistan where the guests tend to travel in order to witness the main center Sogd. It is also named as the "Central Asian Pompeii". Here the markets, temples, gardens can be seen. Also, the traditional dwellings of the locals can be seen and the ruins of the last times are also here. We offer the night to be spent in the hotel.

Day 13: Penjakent - Iskanderkul Lake
There are wonderful locations of natural meaning as Iskanderkul lake at the altitude of 2255m above sea level. It is one of the most amazing and colorful lakes of Tajikistan which seems to be the pearl of Central Asia. Here the guests are able to go hiking, in the time of 20 minutes. At the same time the waterfall of exquisite beauty can be seen. In comparison with the countries of CIS Tajikistan takes a significant location in Central Asia in the turn of the water resources, as here there are 1 000 rivers, 2 000 lakes and 8000 glaciers. The guesthouse will be taken for the night.

Day 14: Iskanderkul Lake - Dushanbe
In the last days of the tour in Tajikistan the boarders make a way to the Fann Mountains, as they travel back to Dushanbe. The main site to be visited is translated as Mountainous Country - "Kuhistan". There are more than 30 lakes of pristine waters at the territory of the Fann Mountains. Then the way is made along the Anzob pass of 3372m above sea level. The night is organized in the hotel.

Day 15: Dushanbe - Norak - Dushanbe
Today we are going to have the last active day in Tajikistan, making a tour to Norak, or the reservoir which is said to be named as the Tajik Sea. For now it is the largest reservoir in the country which makes energy for the hydroelectric plant of the dam. The territory is also covered with amazing gorges and peaks. Then the city of Dushanbe is taken in attention for the city trip along Rudake Park, National library, White House, National state seal, and House of parliament. The striking site is the biggest National Flag of 165m high. The night will be in the hotel after the active day.