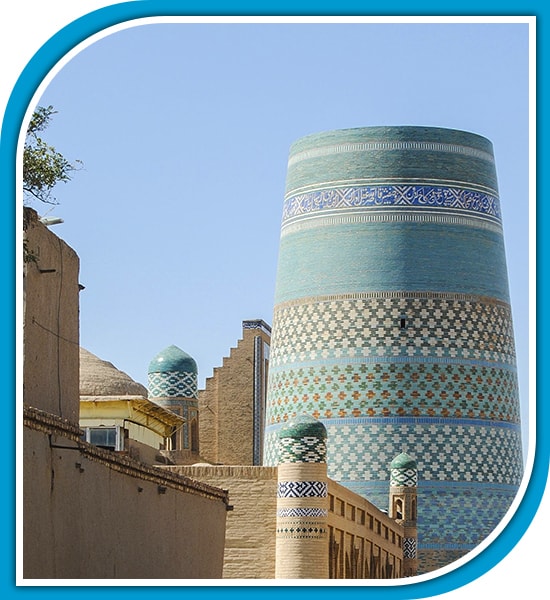 
Day 1: Tashkent
Happy to meet you in Uzbekistan and show the tour from the airport to the city. The city tour will be made first along the Independence Square with the further visiting of the Amir Timur square. It is better to make a view of the famous Tashkent metro, the first line set in 1977. Our guests usually visit the Chorsu Bazaar, Kukaldash Madrasah and Hast Imam. All along the tour the guides inform about the legends and myths of the country. The night will be in the hotel.

Day 2: Tashkent - Samarkand
Uzbekistan is famous for being the country where the widely known city Samarkand is located. But the guests can get there just taking the train. This city is located in the valley which in its turn can be found on the river Zerafshan. As for the statistics, it is the second largest city of the country Uzbekistan. Then everyone travels the city tour, with visiting of Registan square, Shakhi-Zindeh, Mausoleum Guri Emir and Bibi Khanum Mosque. Most of the mentioned sites date to the 15th century. One of the famous mausoleums to be taken into account is Shakhi-Zindeh. After the sightseeing the visitants spend the night in the hotel.

Day 3: Samarkand
Today the entire tour will be devoted to the city Samarkand. And in this case we visit the Ulughbek observatory, the location of the 15th century, which actually was created in 1437. Then everyone goes along the local Broadway where lots of shops can be taken into account for the souvenirs to be bought. Right here you can visit the National bazaar Siab and found the impression of the traditional products of the people of Uzbekistan. The night will be in the hotel.

Day 4: Samarkand - Gijduvan - Bukhara
Bukhara city is located on the way to Gijduvan village, famous for the pottery workshop. For now the city is known to be visited with an aim of seeing famous Gijduvan ceramics school. The skills were going from one generation to the next one. Then we make a stop at the memorial complex of Al Bukhary for seeing the collection of Sahih al-Bukhari. The night will be in the hotel after the emotional day.

Day 5: Bukhara
Bukhara, the city of Uzbekistan is mostly named as the Citadel Ark. It is said to be created in the 4th century, and tend to be the location of the Samanids mausoleum and several dynasties of Bukhara Empire. The Empires were there actually in the 10th century. The tour here continues with the visiting of the Chashma Ayub or Job's well and Bolo-Hauz mosque. Where 40 columns are located. Then the guests tend to travel along Nodir Divan Begi and Kalon minaret, Kalon mosque and Mir Arab Madrasah. The night will be spent in the hotel after having visited the Poi Kalon complex.

Day 6: Bukhara
Everyone is still in Bukhara and today the boarders travel to the next famous Bahauddin Naqshbandi complex. It is considered to be the unique and secret one, for being famous for Sufi Leader and Philosopher. At the same time the guests are going to witness Kushbegi and Muzafarohana placed mosques. These were popular actually for the pools and the gardens. Uzbekistan tour in Samarkand also concerns the investigation of castle of Bukhara Emirs - Sitorai Mohi Hosa complex. Here exquisite architect can be seen. On the way the famous Sumiton village is visited and the Dead Town of the Samanids dynasty is visited. The night will be in the hotel.

Day 7: Bukhara - Khiva
In order to travel to Khiva we make a stop to view about 140 monuments of great architectural significance. The territory is famous for the greenery, the parks and the gardens, these are amazing streets, narrow and wide. Right in this tour the overseers can see the famous Kizilkum desert and Amu Darya river. Actually the country is well-known among all of the others in Central Asia. Taking a stop in the city of Khiva we spend the night in the hotel.

Day 8: Khiva - Urgench - Tashkent
Happy to return to Tashkent, the city where all of the popular highlights of Uzbekistan can be presented. Actually we visit the city in the middle of the city, known as Ichan-Qala - here the buildings are old, a good amount of mosques and palaces are here. The city is known to be created with about 60 monuments and 400 dwellings of the people. Then we make a tour to Kunya-Ark fortress (17th century) was found by Muhammad Arang Khan, the Kalta Minor minaret and take a nap in the hotel of Tashkent.

Day 9: Tashkent - Flight
Before getting to the airport the breakfast will be offered.